With so many states changing their laws to legalize medicinal and recreational cannabis, being the first major retailer across the nation appeared to be an achievable and excellent idea. The best intentions were made when MedMen (OTCQB:MMNFF) tried to become that nationwide retailer of cannabis. Along the way, MedMen failed to achieve their goals and instead are staring into an abyss of a future.

MedMen is heavily in debt. Their assets are exceeded by their liabilities by some 50%. They continue to lose money QoQ and they are continuously out of cash having to put together more and more deals, diluting shareholders, and increasing liabilities. There is a constant change in upper management as the company addresses costs and attempts to become profitable. MedMen’s turn-around project has not gotten close enough to merit holding out. Retailers in the cannabis industry generally are profitable, but the world’s biggest cannabis retailer consistently is not.

Should management hold out even further in the hopes of finally getting to profitability, or is the company too far gone and folding is the answer?

I had been writing articles here on Seeking Alpha while I put together a portfolio of companies to invest in for a long-term holding. I was heavily focused on the cannabis world and was very bullish two years ago when it was first taking off. Unfortunately, a health issue took me out about 18 months ago and left me completely laid out for 15 of those months. During that time, my portfolio was completely liquidated.

Now, I am back looking at the cannabis industry and I believe the timing could not be more perfect; I am far more bullish now than I was earlier.

Previously, I had written about MedMen, but not very kindly. While they had many issues, one of the things that I found interesting was the location of their retail stores, as I mentioned in an article here on Seeking Alpha. MedMen was placing its retail stores near affluent neighborhoods. I found that odd. The data I was finding showed that companies were seeing the ol’ 80/20 Rule apply where 80% of revenue was generated by 20% of clients. The clients of cannabis retailers were generally lower-class citizens, but consumed a significant amount of cannabis and did so frequently.

There was another data point that I ran across doing some research via StatCan where it showed that proximity to a dispensary mattered. The closer you were, the more you shopped. However, if you placed a dispensary in an affluent neighborhood, that did not necessarily mean that those individuals would necessarily make for continuous customers.

Despite having deep pockets, these customers in affluent neighborhoods were simply not the continuous customers that a dispensary needed to support itself. I had wondered about MedMen’s future fortunes and their profligate ways. It does not seem to have worked out well, as I had predicted earlier.

MedMen had tried to increase revenues and their footprint via purchasing existing operations – such as the PharmaCann deal that fell through. At one point the company had some 80 retail outlets but now are down to what looks like 24. The company has burned through a considerable amount of cash. They do not have much to show for it after all they have done.

In fact, there have been many changes to management at MedMen and they are currently operating under an interim CEO, Tom Lynch, since the previous CEO stepped down in February. Just this month, they named a new Chief Revenue Officer, Tracy McCourt (Who has an extensive resumé in retail). The continual changes are gearing the company to focus more exclusively on premium branding and sales. Simultaneously, MedMen is focusing on continued cost-cutting and structured discipline with expenses internally as outlined in its annual report last year. Possibly, they might have achieved some goals.

Revenues increased for the quarter, this off of their lows of just last quarter: 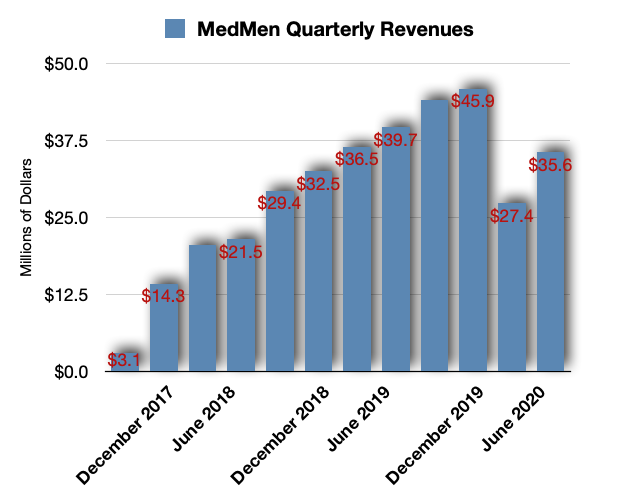 Revenues declined in the previous quarter due to COVID-related downturns. The rest of the country is seeing increases in retail sales. However, as it turns out, the company happens to be in some of the hardest-hit states. The lockdowns have had significant impacts on their revenues. The previous quarter saw a 40% decline whereas this quarter’s print of $35M is ~30% higher. Still, the revenue is below the peak of the May quarter of $45.9M. I would expect that since the revenues were so sharply impacted from COVID, the next quarter may be bleak as well considering that California has shut down once again.

Through no fault of their own, COVID is making this turnaround far more difficult for MedMen and could potentially be the final nail-in-the-coffin to bury the company.

Management at MedMen is making an asserted effort at improving its operating efficiencies and cutting costs: 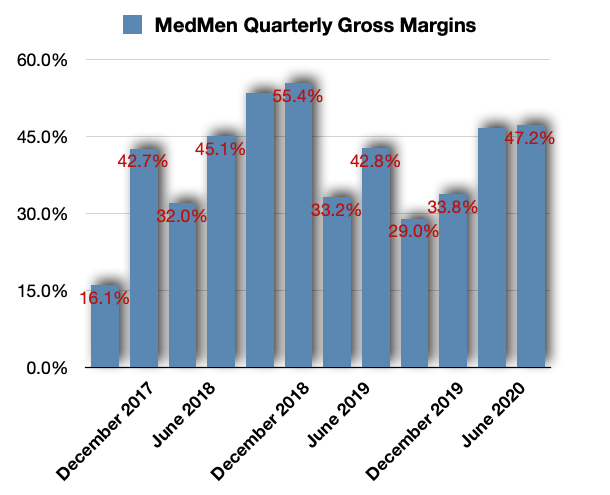 Gross margins are tipping on the higher end of MedMen’s historical numbers. From my research with cannabis stocks, coming in about ~50% on gross margins is in line with some of the profitable companies. This is a good start to work with.

At the same time, operating efficiencies are moving in the right direction… but… 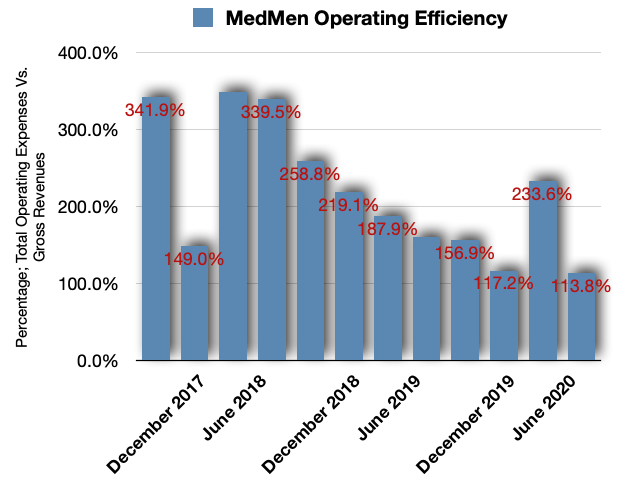 Operating efficiencies are calculated from operational costs over gross revenues. This includes labor and the costs associated with selling products, but not input costs for the products (That is gross margins).

A company needs to keep its efficiencies below 100%. Not only are profits derived from the revenues, less input costs to produce a product, but they also include the labor costs of producing and selling the products. Given that, the only way MedMen could achieve profitability is to have its operational costs not only below revenue levels, but less than the total of gross profits. Given that gross profits are ~50%, operational costs would need to be ~25% of revenues, leaving 25% for net profits (less other expenses such as debt service).

MedMen outlined its strategy for achieving EBTIDA profitability in its 2019 annual statement. One of the focuses was cutting costs and achieving disciplinary measures that would get to its profitability. 113.8%, despite this being a sloping downward trend, is a gaping chasm from where it needs to be in order to achieve the goal of even getting to break-even.

To give you an idea of where SG&A needs to come in, here is a look at MedMen’s most recent SHG&A chart: 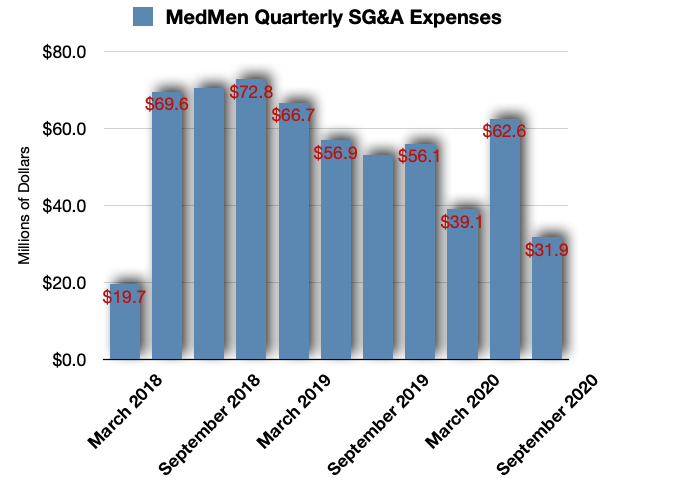 Kudos for the downward slope. But, the number would have to hit about $7.5M in order for them to achieve their goal given the revenues of $35M and 47% gross margins. This would be difficult. From an economist standpoint, SG&A could maintain the exact same level if revenues quadrupled, all other inputs maintaining their current levels.

I say this to point out the difficult task MedMen has with this turn-around project. And, while they have achieved cost-cutting in their operational costs as well as improving the gross profits, there needs to be far more increased revenues in order to hit an economies-of-scale.

Book value is a serious problem. This quarter, MedMen reported that there was no book value. That may be a misnomer of sorts. Here is a look at Book Value Per Share from the company’s data: 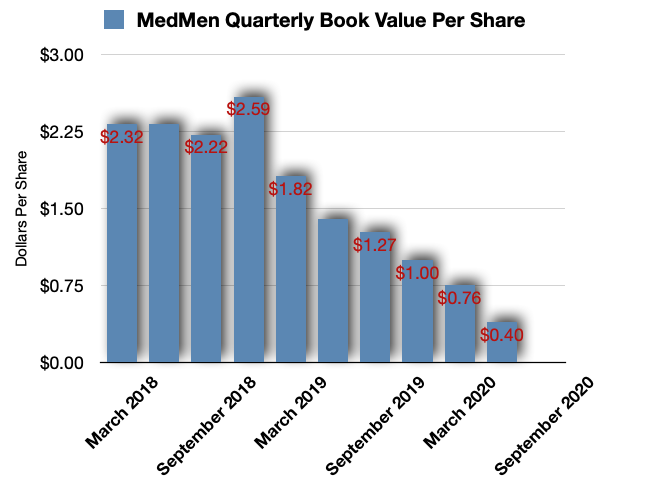 When you look at the numbers, despite MedMen shedding down some assets that either achieved some form of profitability that they wanted to monetize them, or some other reason for selling the assets, MedMen seemed to have retained its liabilities along the way, and in fact, increased them. Assets have come in significantly lower and lower whereas liabilities are increasing slightly more and more:

Here are MedMen’s assets and liabilities visually for you to follow along: 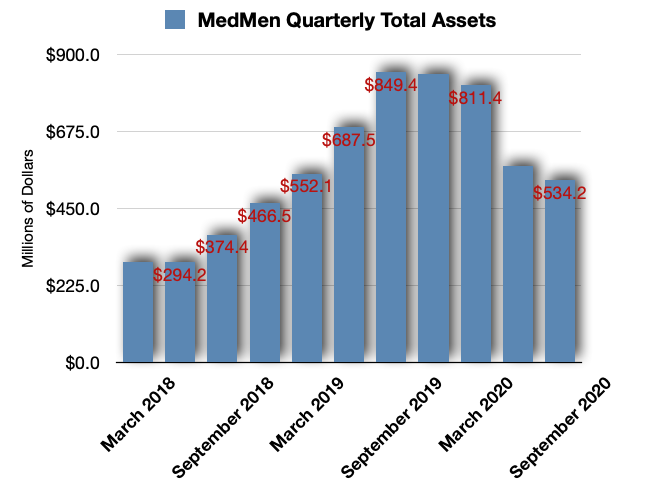 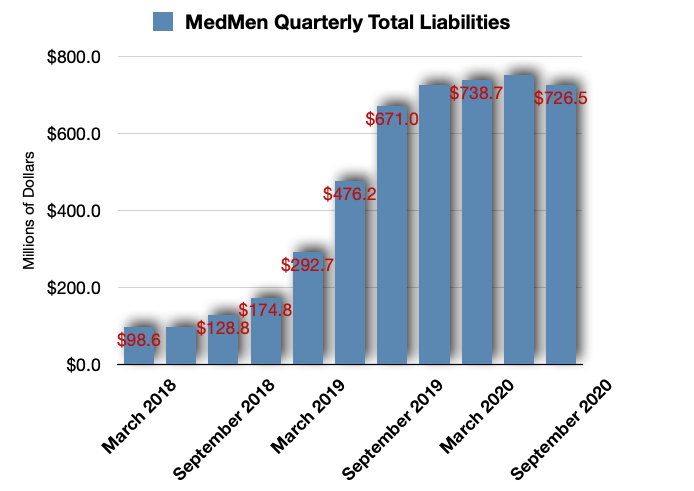 Despite management working through several critical numbers that they reported for the quarter, there was no mention of what happened in assets. The only thing that was mentioned in this segment of the business was capital raise completions the company was involved with during the quarter, which was stated in the latest earnings release transcripts:

Moving on to the balance sheet, we ended the quarter with $10 million in cash and cash equivalent. There were a number of capital raising transactions we completed subsequent to the quarter end, including additional capital coming in under our unsecured convertible facility, as well as an upsize in our senior secured term loan. We continue to work closely with our capital partners to continue funding the business as we enter the homestretch of our turnaround plan.

Here is the last piece of the puzzle to look at, that being MMNFF chart: 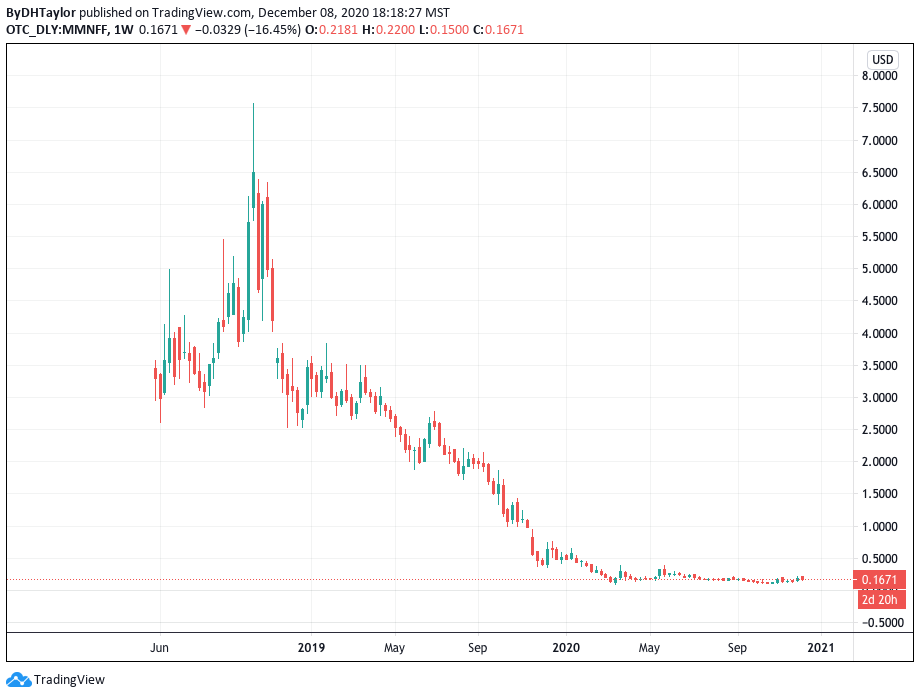 The chart has trickled down from its peak of just two years ago in 2018, and it has been all downhill from there.

Management is calling this a turnaround story. But, I wonder. If it is, seeing the stock is sitting at its all-time low as it is, there is only one way for it to go: Upwards. But, that is if only the company can actually turn things around.

I don’t believe that is possible; I think it is far too late.

The Take-Away: Is MedMen a buy?

There are several glaring aspects that stand out for MedMen. First, COVID and the lack of revenues. This has pummeled the company’s revenue picture and that is unfortunate. The key variable for this turnaround is increased revenues. But, MedMen has seen its revenues decline appreciably.

Despite that, cost-cutting has allowed for improved margins with gross margins hitting higher levels while SG&A costs have been minimized. With increased revenues, if MedMen were to be able to maintain these operational costs, it is possible that increased revenues would improve the chances of this turnaround story. But, COVID.

Then there are the liabilities over assets. MedMen’s debts far exceed its liabilities and servicing this debt is going to be a constant drain on the resources for the company. While MedMen has been monetizing assets they have invested in throughout its two years, they have simultaneously decreased its assets while increased its liabilities. This, of course, has eroded total equity and book value per share.

My previous articles on MedMen were never positive. I cannot see how I can find too many positive items in MedMen’s current state. While I applaud current management’s attempts at keeping MedMen alive, I see the odds seriously stacked against it.

For these reasons, there is simply no way I would put this company’s stock in my own portfolio. That being said, I would not take the risk of going short, either; that opportunity appears to have already passed. I will go neutral at this time. And, who knows? Maybe management can pull off an impossibility.

Disclosure: I/we have no positions in any stocks mentioned, and no plans to initiate any positions within the next 72 hours. I wrote this article myself, and it expresses my own opinions. I am not receiving compensation for it (other than from Seeking Alpha). I have no business relationship with any company whose stock is mentioned in this article.

Editor’s Note: This article covers one or more microcap stocks. Please be aware of the risks associated with these stocks.